Spirituality – the via Francigena

To better understand the territory, the history, the people, past and present.

Parco delle Piscine is just 19 km from Radiocofani, a point along the Via Francigena which was a decisive road in Medieval European culture for the transit of people and goods, as well as knowledge and experiences. A journey on foot by which modern-day pilgrims can obtain a better grasp of the area, its history and people, its past and present.

Mondo X-Convent of San Francesco, Cetona
Parco delle Piscine is 7 km from the Convent of San Francesco in Cetona, which is a seat of Mondo X, a movement founded by Father Eligio Gelmini in 1961 to defend the suffering Man who has been tested by life. His “Community of Life” has given many drug addicts a second chance at life.
Collegiate Church of San Lorenzo
Located in Sarteano, it was built in the early thirteenth century and became a Collegiate Church in 1683.
Church of San Martino
Located in Sarteano, it was built in 1844 and is home to masterpiece “Annunciazione” (1545 approx.) by Domenico Beccafumi.
Church of San Francesco
Founded in Sarteano in the first half of the fourteenth century, this church is known because of the person who commissioned it: Francesco Todeschini Piccolomini, future Pope Pius III.
Cells of San Francesco
A place of great spirituality and naturalist interest exists in Sarteano: the cells, an Etruscan tomb where French sources indicate the definite presence of the Saint in prayerful hermitage around 1212. The place was commemorated by a convent built by the Franciscan monks themselves. 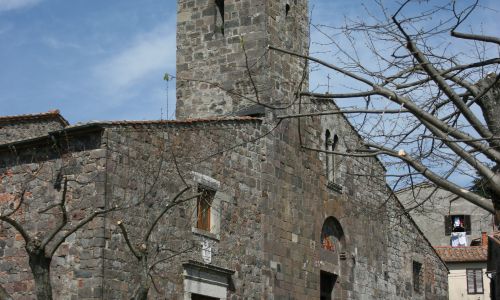 Discover the other itineraries

AND THE SURROUNDINGS OF PARCO DELLE PISCINE

With his prehistoric caves

Folklore – joust of the saracen

The Joust of the Saracen is held on 15 August

At 9 km from Parco delle Piscine

Only 21 km from Parco delle Piscine

A city of Etruscan origins

It has been a UNESCO heritage site since 1995